To say I have been anticipating the opening of Chez Pim‘s Kin Khao is an understatement. I’d been following Khun Pim (In Thai, Khun, often abbreviated as K. in English, is a formal reference, like Ms.) for quite some time. Her book, The Foodie Handbook, has a permanent spot in my kitchen. I had longed to taste her (or her grandmother’s, as she frequently credits) chili jam, or namprik pao. It’s a traditional Thai chili paste, made with dried chilis — super potent, but delicious, with a hint of sweetness. My favorite way to eat this chili paste is with a squeeze of lime and with chiccarones, or just spread over some toast.  But I digress…

I finally made it to Kin Khao (which literally means “eat rice” – a term Thais use to say “let’s eat”) two weekends ago. I really didn’t know what to expect. I was anticipating traditional Thai flavors that K. Pim frequently mentions, but also playful explorations on Thai dishes. After a truthfully lackluster meal at the highly hyped Night + Market in Los Angeles, I braced myself, but went in with an empty stomach and an open mind.

Kin Khao is adjacent to the Parc 55 in Union Square, a somewhat hidden location, but almost fitting to me in that it reminded me of restaurants adjacent to/ in hotels in Bangkok. The decor is modern, with hints of kitschy Thai memorabilia that delighted my husband and our friend. Each table had a tray with chopsticks in an old pepper tin (vintage, cute!), forks and spoons (the proper Thai way to eat – not with chopsticks as many tend to think), cloth napkins, and the original Sriracha, from the town of Sriracha itself. I’m not talking the rooster from California (although a favorite in my household, too). This is the original for which Huy Fong’s creation was based off of. And it’s extremely hard to find in the Bay Area. The serving trays are stainless steel/tin with floral designs, reminiscent of the ones used each morning when taking packaged foods out to the front of the house to give alms to monks coming by. I loved the little details of home at this place.

We started off with drinks, delicious with hints of Thai flavors and not too overpowering:

From left to right: Thai Herb Julep, Ladyboy Collins (mine – it changes colors from pink to purple. Get it? ;), and the Chow Suan Gin

Next, some small bites. Left is my friend’s favorite dish growing up, Yum Kai Dao, or Fried Egg Salad. It’s a simple dish, when done right, brings out flavors of home. I thought this was tasty, and especially appreciated the high quality eggs, but it wasn’t my favorite of this bunch. The Pretty Hot Wings, right, were also very tasty. They definitely had a kick and I loved the tamarind flavor in them. And, as crazy as it sounds, they were even tastier with more Sriracha to dip!

The next dish gets its own line because it’s my favorite thing here at Kin Khao (thanks to K. Pim for introducing it!). The Saeng-wah Salad is a modern take on a traditional Thai salad, the Saeng-wah (literally meaning “play-chastise”), which is basically shrimp crudo, made in a Thai style. It’s basically very ceviche-like (and probably why I love ceviche — these are my favorite types of dishes!), with a Thai kick – the red chili peppers are potent, so watch out! This is a traditional Thai dish that I’ve never tried, so I was pleasantly surprised. K. Pim kicks it up by pairing it with another Thai favorite, pla duk foo, or crispy catfish, also typically eaten with a salad of green mango that has the same tangy flavor. Served with raw shallots and red peppers, I could not get enough of this dish. I  basically ate the entire thing myself the second time we visited, as hubby is allergic to shrimp. More for me! I loved that K. Pim brought us over extra chili peppers, which I did make use of with this salad (mouth watering as I type…) 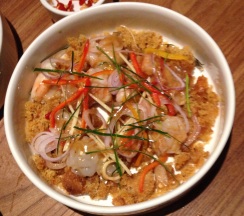 Another thing I really appreciated about Kin Khao was that the rice, both red (Thai version of brown rice) and white were complimentary. It reminded me of how family style should be.  On to some meatier dishes, we tried the chili jam clams (pictured below), Kua Kling Ribs and Rabbit Green Curry (not pictured – was too busy devouring 🙂

I was really looking forward to trying the chili jam clams, and they didn’t disappoint. They were sweeter than I imagined, but I am also accustomed to the bottled chili jams. What I appreciated most about these were the size of these babies that you would not get at any mom n pop Thai restaurant. These clams rivaled those I purchased for my Asari Shio Ramen I made in the fall. They were huge! 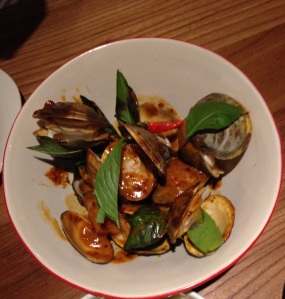 The  Khun Yai’s Green Curry with Rabbit was also an interesting take on your traditional green curry. The curry flavors didn’t stand out as much as I had hoped — definitely heavier on the coconut milk side, but the rabbit meatballs were so tasty, and the rabbit meat was not gamey at all.  I imagine the second day for this curry as a leftover would have more intense flavors, as curries only get better the longer you keep.

I’m disappointed I don’t have a photo of the Kua Kling Ribs because they are my husband’s favorite, and the item he ordered again on our second time at Kin Khao. The flavors of the rib tasted like the curry was really homemade — like chopped and pounded with mortar and pestle with love to create this dish. I’ve had this traditional southern Thai dish in many places (including Night + Market and authentic Kua Kling in southern Thailand), and this was pretty close to what I remember eating in Thailand. It wasn’t too soggy, and like many curries. was even more intense as a second meal (as proven by my dinner the following day).

We ended that night trying the dessert on the menu, the Black Rice Pudding Dessert. The first thing I appreciated about this dessert was that she calls it what it is in Thai: Black Rice. It ain’t forbidden – it’s my favorite type of rice. The texture of black rice is a bit heartier, much like brown rice. It’s served paired with coconut milk (a must!) and caramelized palm sugar (yum – so rare), as well as crispy rice flakes. Last weekend when we visited again, my husband lamented that he really wanted to have this again, but we were sadly too full.

Our second visit to Kin Khao was primarily to catch the Crab Sen Jan noodles before crab season was over. When we arrived, K. Pim sadly reported that they had already ran out of crab for the season (sad face) but not to fear, she had something else for us to try.

The Mushroom Hor Mok is a vegetarian take on another traditional Thai dish, made by steaming a paste mixture of fish, coconut milk and curry. I’ve helped my mom make this dish growing up, and remember tasting it raw (and having her chastise me for sticking my finger in the batter). K. Pim’s version of this dish goes the vegetarian route, and combines another Thai favorite, khao tung. A traditional Thai snack/small bites dish, khao tung, the rice crackers seen here, are eaten with a savory mixture of coconut milk, peanuts, caramelized onions and ground pork. The hor mok is served in a pot de creme style, eaten with the khao tung (it’s normally eaten with regular rice).

This was definitely an interesting flavor for me, again, not as intense as a curry, but there was something addictive about the mushroom version. K. Pim explained that they used agar agar (ผงวุ้น in Thai) to thicken the hor mok, since it was vegetarian and the properties that fish provided to the paste could not be achieved. I thought that was so amazing, because I didn’t notice a difference in the texture very much at all. And, like the rest of the curries I tried, the flavors became even more intense on the 2nd-3rd day of this hor mok’s life — delicious!

Moving on to the northern region of Thailand, another dish I was keen on trying was the Sai Ua + Nam Prik Noom. Sai Ua is the sausage, pictured below, made with similar flavors as the Kua Kling (although North and South, we realized the flavors were very similar). The intensity of the herbs comes from the kaffir lime leaves. It’s served paired with another northern favorite, Nam Prik Noom. Traditionally, this is a bright green chili paste made from green peppers finely minced. K. Pim creates a more salsa-like version here with roasted peppers, which give it a unique, albeit still intense flavor. It’s also served paired with homemade chiccarones (need I say more?) and quality, fresh vegetables. I’ve never had butter lettuce with nam prik noom, so I couldn’t stop munching on that!

The last item was truly my Ratatouille moment — the dish K. Pim said was a surprise. I have not seen it on the menu yet, so I feel very blessed and fortunate she made it for us! It was a dry version of a chili paste, dry fried with deep fried kaffir lime leaves. Pla Duk Foo Prik King — basically taking the crispy catfish and frying it with the traditional prik king paste. Most chili pastes are eaten paired with salted eggs, so K. Pim brought some of that over, too. We could tell they were homemade — the consistently and level of saltiness reminded me of my mother’s precision in timing how long she wanted to salt eggs. Store bought salted eggs are often too salty and lose the right consistency in the egg yolks. These were perfect. And it all tasted like home. Moreso because I had a similar bottle of this prik king at home from my mother. K. Pim’s version was meatier and sweeter and I nearly shed tears of joy when I ate this all paired together over rice (I really was that happy). 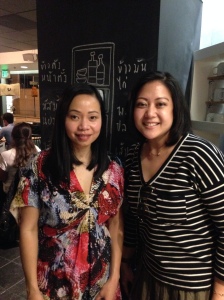 Thanks to K. Pim for delectable experiences at Kin Khao, complete with the Thai hospitality. I can’t wait to come back!

My husband describes it best when he says Kin Khao isn’t your average Thai place in the States, which seeks to mimic the down-home-comfort flavors at a simple, family-style restaurant (and not to say I don’t love those!). As a Bangkokian (?), Kin Khao is that place you’d go on a Friday night with friends — the hip new place that’s reimagined the flavors you grew up  with into something magical.