When I was growing up, my mom was a full-time working mother who also was a pretty darn good cook. While she believed in the process and diligence of details in cooking, like making her own coconut milk for desserts, having a full time job while also preparing a full meal for her family each day meant she took some shortcuts. One of the shortcuts I remember best that she still uses today, is chicken broth. While I’m a little more semi-homemade than Mom, I’ve certainly held to the chicken broth shortcut in making soups, porridge, and noodles.

I recently visited a new izakaya near my office that converted me to being a clam lover. I eat pretty much anything, except oysters, clams and mussels. Recently, however, I’ve grown to actually like clams and mussels (oysters I still can’t handle). Inshou made a sake clam dish that left me wanting to make asari miso soup, which is actually part of traditional Japanese breakfast. 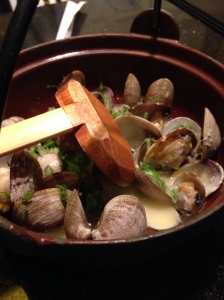 Along those lines, I wanted to make a Japanese soup one day that transcended the basic miso soup — no shortcuts. I know miso soup came from more than the freeze dried packages that were my shortcut. I owned the miso paste. But what else was involved in a true Japanese soup? I took to the Internet, of course, to find my answer and a recipe for asari clam soup. I came across the most amazing YouTube channel, teaching folks how to make simple Japanese cuisine.

What fascinated me most was this episode that has basically transformed how I see Japanese soups and clam preparation. The basics for any Japanese dashi broth begins with kombu, a kelp. If you’ve ever had plain shabu shabu and seen a green seaweed-like thing floating in the water, then you’ve seen kombu. After a hearty boiling of this kombu, the kelp is removed and replaced with kasuobushi, a salted, dried fish that is then shaved to paper thin slices I’ve known it as okaka until I was enlightened by the great David Chang.  If you’ve had agedashi tofu or okonomiyaki, you’ve probably had this as a garnish in its pure form. Like kombu, kasuobushi is also the base of any good Japanese broth.

The kasuobushi is boiled for a good 30-45 mins, then strained to create the base of the soup, to which you’d then add the miso. In this instance, I wanted to make asari (clam) miso soup. One of the best tricks I learned from watching the YouTube video was how to get the clams to expel sand: you trick the suckers to thinking they’re in their usual habitat being, well, happy as a clam.  Clams like shallow water, lest they drown, so prepare a shallow tray/bowl (somewhere where you can spread them out) with warm salt water — catch my drift here?

Then, place the clams in the water just so there’s enough water covering them. Cover with something so it’s dark and they think they’ve buried themselves in the sand. Keep it like this for at least 15 mins. You’ll start to hear movement and wonder if the dog’s gotten into your groceries again. Then, you’ll realize it’s coming from the clams and that they’re really alive.  Here’s a video from my Instagram of this whole process, with screen shots below. If you watch carefully, you’ll see one actually spit. This cleaning process happens as you’re waiting for the kashuobushi to boil. 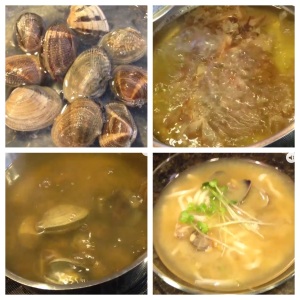 The first time I made this dish, I swore up and down I wouldn’t make it again. The thought of the clams spitting traumatized me too much. But then, I craved this soup again, and thought about going a step further to creating Shio Clam Ramen one day when my new ramen spot was too full to accept our party (You can still be pretty sure I won’t be cooking live crab anytime soon). Shio broth is also made with a similar process, with the addition of another type of fish on top of the kashuobushi.

So, if you’re craving clams or Japanese food, I suggest you high tail to the links below. Ramen talk to be continued…

Watch: The Mind of a Chef, Season 1 (also on Netflix – binge watch your way to food cravings!)

For step by step instructions on making asari clam soup: How to Make a Japanese Breakfast (YouTube Channel Video)