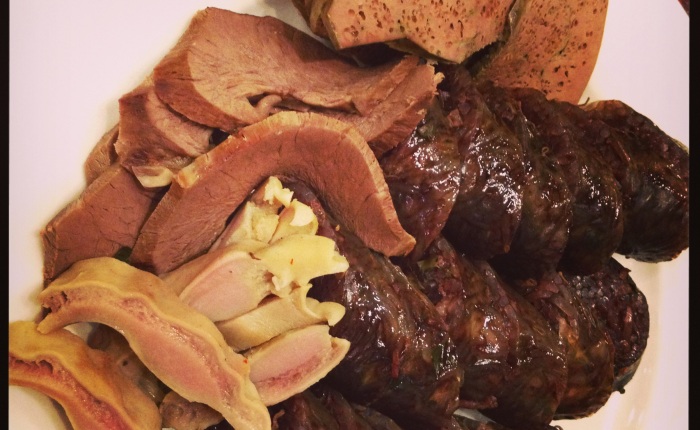 Trying to get back into a regular cadence of posting. Being on vacation more than a month ago and the curveballs of life have thrown me off from daily routines (including proper diet, sleep and exercise)….

Eating pig parts has never seemed “exotic” or weird to me, as it’s something I grew up with. My mom often says that the Chinese (and those cultures with Chinese-based population, including Thailand) don’t let food go to waste — every part gets used. So when pig ears became popular at new restaurants, I had to chuckle a little bit. They’ve always been a favorite of mine growing up. Something else I grew up eating lots of was pork blood. Eaten in many different forms by many Southeast Asian countries, including Thailand, I grew up with it in soups and some curry dishes. One of my favorite comfort foods, often served at breakfast, is a soup with ground pork, pork blood, vegetables and pig parts, usually kidney, stomach, intestine — you name it.  It wasn’t until much later that I realized a popular Northern style noodle dish (not khao soi) used pork blood as well.

You’ll be surprised what other Thai favorite dishes contain blood. I mean, how do you think boat noodle soup is that color? Granted, the versions in the US aren’t really heavy on the blood.

As I began exploring other culture’s foods, I was pleasantly surprised to see other countries didn’t waste their food either. Morcilla, or blood sausage, is also a favorite of mine. Somehow, having the blood mixed in with the sausage provides depth and texture to the meat. The Taiwanese have also perfected the culinary art of transforming pork blood into tasty forms by mixing it with rice cakes. I first was introduced to this form by some Taiwanese friends while we were at Taiwanese hot pot (which should never be confused with Japanese hot pot, but is equally delicious). The pork blood is mixed with glutinous rice cake, masking the iron-y taste of the blood but producing a unique flavor that is delicious in hot pot, but equally as tasty in a street food version. 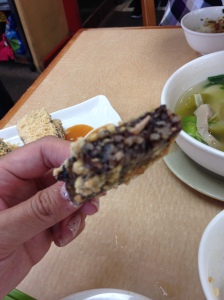 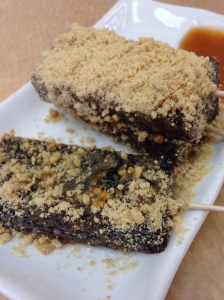 Perhaps my favorite pork blood product is in (surprise) Korean food. I’d first heard of soon dae from Korean dramas, then had to look it up to see what the big deal was about. Made with pork blood, rice and Korean vermicelli noodles, when done correctly, soon dae should be flavorful and not have an overpowering iron-y taste. It’s often served as its own dish, with other porky friends — heart, lungs, intestines, kidney, liver — a soup, or as a spicy noodle dish (soon dae bokkum).  It’s eaten dipped in a Korean sea salt/pepper mixture, with  Korean spicy sauce, and sometimes a Korean shrimp paste. 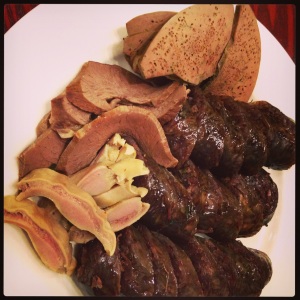 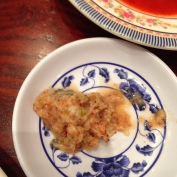 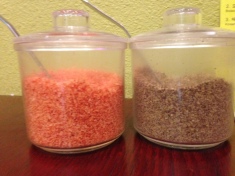 Left: A Korean fermented shrimp paste, eaten with the meats. Right: Korean Salt and Pepper to also eat with the soondae

I’m used to fermented shrimp paste, as Southeast Asians consume a version called kapi. This version was much more pungent and equally as tasty. If it weren’t for it’s saltiness, I’d tried to consume it plain.

One of my Korean friends, Sun, took me to the best soon dae place I’ve ever been to, of course in Los Angeles. Eighth Street Soondae is a mom n’ pop run shop in an unbeknownst area, off the normal beaten path of Koreatown.  And because I can’t always go for soondae while I’m in LA, I’ve finally found a place in the Bay Area to satisfy my cravings (suggestions always welcome for new soon dae places to try!). Obok is located in the small Korean community area of the South Bay. I’ve realized that soon dae restaurants don’t get many reviews on yelp, so I gave this place with only 5 reviews a shot. Gladly, it did not disappoint. Now, I just have to curb my visits here (to get back into the aforementioned diet/exercise routine) for when I really want some comfort food. 🙂 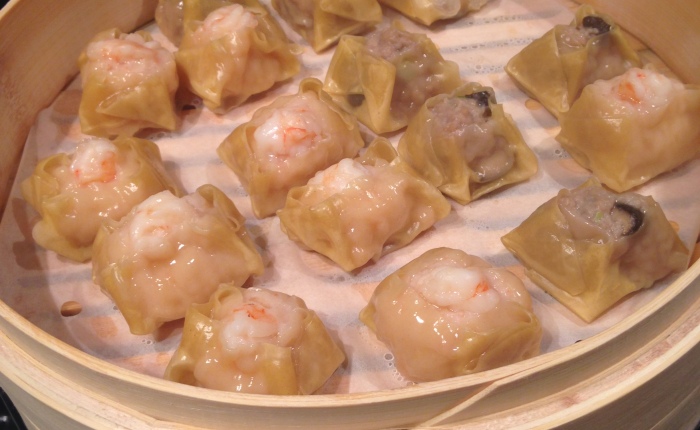 Spring forward! It’s been quite awhile since I posted. Lots to update on my trip to Thailand/Hong Kong, as well as some other fun things. But first, a party….

My mom once told me that she loved eating wonton soup when she was pregnant with me, so my love for minced meat wrapped in pastry of different forms doesn’t surprise me. Last month (while eating a gyoza), I was marveling about how many different types of dumplings existed in the world. There was the gyoza I was eating (Japanese), xiao long bao, or soup dumplings, which originated from Shanghai, but became popular through a Taiwanese chain called Din Tai Fung. Then, there were mandoo, the Korean version, a bigger more plump dumpling, eaten steamed, pan fried or in a soup during the new year. So many different types of Asian dumplings! And if you think beyond that, there’s ravioli, European dumplings, western dumpling soup — possibilities are endless! 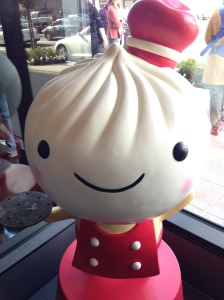 With that, I decided to throw an international dumpling party a couple of weeks ago. We’d help make a few different types of dumplings and enjoy them all together. I thought I’d kick it off by making Korean mandoo with a beef filling. Dumplings are such an ideal food — they are packed full of goodness in such a small package, but little did I realize the work that goes into them! 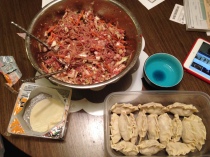 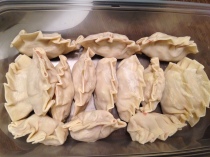 I won’t place blame on one thing in particular, but the extreme jet lag I was still suffering, along with the full work week did not help with my already lacking skills in following detailed instructions (I hate putting together IKEA furniture for this very reason!). I forgot to par-boil (in Thai, ลวก) the cabbage before combining it into the mixture. You’ll also notice the giant batch here — I tried to double the batch, but did it wrong and added way too much of one thing (onions – oops) and way to little of another for it. I ended up picking out the onions (which were supposed to not be raw, another oops). I also improvised and added in some shitake mushrooms (yum!) and shredded carrots (bad idea – see below). I spent about 3-4 hours putting all the dumplings together, from prep to wrap.

The mandoo turned out decent, but I came away with many lessons from my first attempt:

My friends and partners in dumpling-making crime the next day were much more successful. They followed the instructions in their recipes (and were also already-skilled cooks). 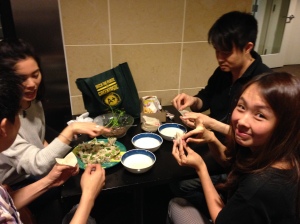 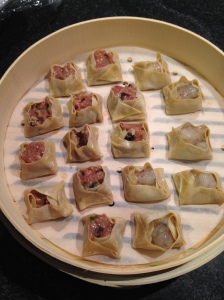 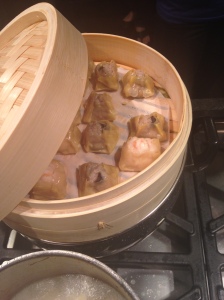 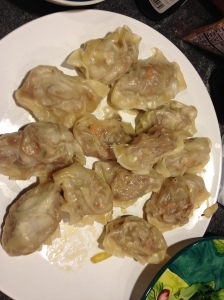 Gyoza from my partner-in-crime and co-host, Rose

In total, we had 4 different kind of dumplings: my mandoo (Korea), two different styles of shumai (Hong Kong), a gyoza (Japan).  We also had some Taiwanese sticky rice, egg noodles and roast duck to round out our feast.

I almost feel like Sandra Lee (gah!) or Ina Garten for saying this, but throwing a dumpling party doesn’t have to be as time consuming as I made it. The fun was in making the dumplings and eating it together. 😊